How to Open a Bank Account in Norway [Complete Process] 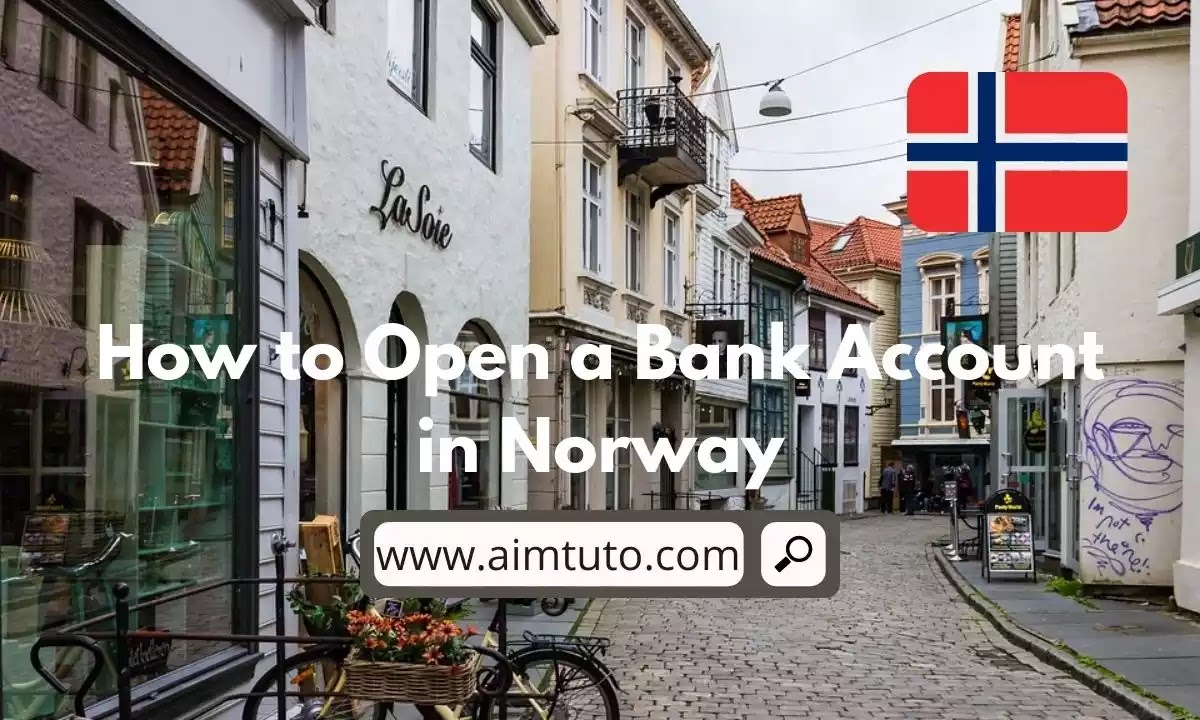 Norway is one of the most expensive countries in the world, because to its vast oil reserves, cold weather, family-oriented culture, and fishing. Despite its high cost of living, it is still recognized as one of the top countries for quality of life, which is why so many expats flock there. Knowing how to open a bank account in Norway can be very important to establish yourself financially in the country.

It's such a popular tourist destination that immigrants and expats account for 16.8% of the country's population. So you're not alone if you've always wanted to live among snow-capped mountains or Norwegian fjords homes in Norway.

One of the first things you'll need when moving to another region is a bank account in order to get around easily in daily life. It is not difficult to open a bank account in Norway, but there is a procedure to follow.

A bankkonto is the Norwegian term for a deposit and withdrawal account. A bankkonto comes with an International Bank Account Number (IBAN), which allows you to transfer money between accounts in the Single Euro Payment Area (SEPA—which includes every country in Europe, including those outside the EU) for free.

The majority of Norwegian banks are contemporary and offer online banking. While there is no price to start an account, banks may charge a monthly fee to keep it open.

Keep in mind that Norwegian businesses will only pay salaries to a local account, so even if you already have an account in another SEPA countries, it's worth opening a bank account with a Norwegian IBAN.

CHECK ALSO: How to Open a Bank Account in the Netherlands [Complete Process]

I'm I Eligible to Open a Bank Account in Norway?

Anyone in Norway who is 18 years old or older and has a valid passport is technically entitled to open a bank account. Non-residents and non-EU nationalities, on the other hand, may find it more difficult. For starters, banks in Norway require evidence of address.

Some banks will even need a letter of recommendation from your present bank to guarantee that you aren't too risky to take on as a customer.

Finally, you'll need to apply for a Bank ID in person at a branch to open an account. Students have the ability to bypass these requirements by showing proof of enrollment in a Norwegian university.

CHECK ALSO: How to Open a Bank Account in Luxembourg [Complete Process]

What are the Necessary Documents to Open a Bank Account in Norway?

You'll need a Norwegian National Identity Number to begin. This is given to those who are allowed to stay or work in the country for more than six months by the local tax assessment office.

Those who want to stay for less than six months will instead be given a D-Number, which can also be used to create a bank account. It's worth noting that these can take up to two weeks to arrive.

Banks may be able to order a D-Number on your behalf as part of the account opening process in some situations.

In addition to your Norwegian National Identity Number or D-Number, you'll need the following to open a bank account:

All of these documents are rather simple to obtain, so you should have them all before searching for your perfect bank.

Can I Open a Bank Account in Norway from Abroad?

A regular bank account cannot be opened from outside Norway. If you're from a prominent country and ready to make a large deposit, you might be able to open a savings account. DNB Bank, for example, has a one million Norwegian kroner minimum deposit requirement.

However, if you're low on funds and want to open a regular bank account in Norway, you'll need to get a Norwegian address first.

CHECK ALSO: How to Open a Bank Account in Liechtenstein [Complete Process]

Can I Open a Bank Account in Norway as a Non-Resident?

Yes, a non-resident can open a bank account in Norway, but it can only be a savings account, and there are numerous requirements, including being an EU citizen or a citizen of SA, Canada, Iceland, Japan, Switzerland, New Zealand, or Singapore.

If you are a US citizen living in a supported country or Norway itself, you may open an Norwegian bank account without hassle.

Opening a Bank Account Online in Norway as a Non-Resident

You'll need a Bank ID, which you can obtain by showing your passport and D-Number / National Identity Number to the bank of your choice. You will be able to open an account online once you have received your Bank ID.

CHECK ALSO: How to Open a Bank Account in Italy Online [Complete Process]

If you choose to go with a traditional bank, it's a good idea to evaluate fees and charges involved with keeping an account. It's advisable to schedule an appointment at a branch once you've gathered all of your paperwork.

If you have already secured a place to live and have your Norwegian National Identity Number or D-Number on hand, you can apply for your Bank ID and open a bank account in one go. You can also open an account online once you have your Bank ID.

Can I Open a Bank Account Online in Norway?

Yes, you can open an account online, but you'll need to first get a Bank ID. You can use your Bank ID to sign legal documents, bid on a house, and even pay bills online, in addition to opening a bank account.

You can get a Bank ID by going to any bank with your passport and D-Number/National Identity Number. You'll be able to open a bank account online after you have a Bank ID.

CHECK ALSO: How to Open a Bank Account in Ireland Online [Complete Process]

Are there Modern Online Banks with a Fast Account Opening Process?

Yes, there are a number of banks that can quickly open an account for you. If you're looking for an online-only banking experience, Skandia Bank, Bank Norwegian, and DinBANK can help. These banks are generally easier to work with because you may apply for your Bank ID online and are usually exempt from ATM fees, unlike other Norwegian high-street banks.

Best Banks in Norway for Residents, Non-Residents, Students and Expats

Which bank is best for you depends on your demands and where you'll be moving to in Norway. Sparebanken Vest, for example, has exclusively Western Norway branches and ATMs.

Let's take a look at Norway's four major banks and the services they provide to their customers.

Despite having only 18 branches and 47 ATMs, DNB Bank is Norway's most popular bank. They have a Silver Card current account that includes a VISA card as well as mobile and internet banking.

In Norway, most, if not all, banks deduct an annual VISA card fee. With a cost of 275 NOK, DNB is the cheapest. They do, however, levy a fee of 10 NOK for cash withdrawals from ATMs.

Alternatively, they offer a SAGA current account that includes a financial counselor and travel insurance, which is ideal for expats who want to fly home every now and again.

The good news for students and children is that ATM and annual VISA fees are waived for these account types.

DNB also provides savings and business accounts if those are more appropriate for your needs.

If you're still having trouble with Norwegian, DNB is the only major Norwegian bank with an English-language website. Furthermore, if you already have a Bank ID, opening a bank account online is extremely simple.

CHECK ALSO: How to Open a Bank Account in Greece [Complete Process]

Nordea, Norway's largest and most popular bank, has 240 branches and 233 ATMs throughout the country. They have current, youth, child, and savings accounts, as well as mobile banking.

Their yearly VISA card charge, however, is slightly more than DNB: 300 NOK. Their youth and kid accounts, like DNB's, are fee-free, and accounts can be opened online using a Bank ID.

Even if they don't have an English-language website, built-in browser translation services like Google Translate in Chrome can be used to compare all of their accounts side by side.

Sparebanken Vest has 35 locations in Western Norway, all of which include ATMs. They have a standard selection of current, student, and business accounts.

If you're seeking for a savings account, though, you'll be disappointed. As with all other Norwegian banks, their VISA Smart current account enables for online payments, simple cash withdrawals, and use overseas.

Customers can open accounts using Bank ID, just like DNB, and the yearly VISA card cost for a current account is 275 NOK, while student accounts are excluded.

There's also a credit card with free travel insurance and 0% interest on purchases up to 100,000 NOK.

CHECK ALSO: How to Open a Bank Account in Germany [Complete Process]

Since the early 1900s, the Danish bank Danske, has had a presence in Norway. Meaning, if you had an account with this bank in your home country which is probably, Denmark, you wouldn't have to open a new account. You can ask for your account to be relocated to Norway. It has 36 branches and 73 ATMs in Norway.

The VISA card cost is waived for Gold and Platinum accounts, although there is a monthly fee of 50 and 75 NOK, respectively.

Danske Bank also has a no-fee student account and a large selection of savings accounts, but no commercial accounts are available.

CHECK ALSO: How to Open a Bank Account in France [Complete Process]

What Banking Fees are Involved?

All banks charge an annual VISA card fee, with the exception of student and child accounts.

There are also ATM costs to consider. If you withdraw money from a competitor bank, you may be charged somewhere between 7 and 10 NOK, with the exception of students and children. Sparebanken charges 3 NOK for withdrawals from its own ATMs and 10 NOK for withdrawals from competitors' ATMs. If you withdraw money from a DNB ATM, you will be charged 10 NOK, regardless of the ATM you use, or 40 NOK + 1% if you use a Mastercard.

Monthly fees are not charged on standard current accounts. However, reward programs that include extra perks like travel insurance and access to airport lounges normally charge a monthly price.

There will be a high surcharge if you need to transfer money internationally. For international transfers, DNB gives the lowest rate of 1.95 percent, but you may anticipate other banks to charge as much as 2.25 percent. Some banks will charge only 0.5-1 percent, but will add a fee of 20-30 NOK on top of that.

You'll also be vulnerable to a lousy exchange rate once the currency is converted, on top of these expenses, which are frequently poorly disclosed. This is characteristic of retail banks and other traditional money transfer services. Wise, on the other hand, allows you to transfer money using the true mid-market exchange rate, which you can check on Google. And with fees that are significantly lower and far more clear.

CHECK ALSO: How to Open a Bank Account in Finland [Complete Process]

Final Thoughts on How to Open a Bank Account in Norway

Norway is highly ranked in the world for quality of life, because to its superb healthcare, education, work-life balance, and beautiful scenery. It's also one of the world's most costly countries. So, if you want to live the Norwiegen dream, you'll need some cash on hand and, ideally, a bank account to put it into.

How to Open a Bank Account in Slovakia [Complete Process]

How to Get a Virtual Bank Account for PayPal Verification [Updated]

How to Open a Bank Account in Slovenia [Complete Process]